Recipes from the Arabian Gulf

Cardamom. It’s pungent, truculent and sweet. It’s been used for centuries in Indian spice blends, Scandinavian sweets and in Middle Eastern recipes and sometimes used to flavor coffee. The pre-oil days of al-Khaleej, the collective cluster of Bahrain, Kuwait, Oman, Qatar, Saudi Arabia and the United Arab Emirates along the Arabian Gulf, where different tribes roamed the desert and coasts searching for food (and trading recipes) are long gone. They’ve been replaced by an era of man-made islands and litter from fast food restaurants.

Two things remain, steadfast and resolute: the value of cardamom and the sharing of food throughout the region.

The food of al-Khaleej flourished as the trade winds from Africa and India brought dhows, the traditional Arabian sailing vessels, into ports along the Gulf, bringing riches in pearls, silver and spices. Ah yes, immigrant spices were a true treasure, bringing life to main dishes and accompaniments. Saffron threads, cumin seeds, chili, curry powder, turmeric and cardamom pods worked together to create incredible tastes and branded the Gulf with a distinctive flavor.

“It [the food of the Gulf] is a means of communication and social maker, a peace offering, a way of demonstrating largesse and hospitality to friends and family, a form of one-upmanship, a conversation starter, a boredom buster and an arena for female competitiveness. Recipes are coveted and secretly exchanged,” says Sarah al-Hamad, author of “Cardamom and Lime: Recipes from the Arabian Gulf,” from which these recipes are taken.

The enticing book contains a wealth of tantalizing dishes, each chronicled by al-Hamad with photographs as they were being prepared in their native lands and compiled to neatly introduce the culinary history of traditions in the coastal region, renowned more for black gold than culinary gold.

The Gulf, however, doesn’t have the market cornered on these delicious dishes. Cardamom spices up bills of fare throughout the United States as well: cooks play with the multipurpose pod to flavor everything from burgers to venison to Arabic coffee. Before eating out (see sidebar), try al-Hamad’s take on these delicious rice and chicken dishes enhanced by staple spices of the Middle East. Commonly sold already ground, cardamom is also available in whole pale white or green pods, which have a stronger flavor. Sometimes Indian and Arabic markets sell the seeds already removed from the pods. To use whole cardamom, remove the seeds from the pods and grind them in a mortar and pestle or spice grinder. When using this spice in soups or stews, gently crush the pods with the back of a knife and add them to the mix. Beware! The flavor of cardamom is very distinct, and can quickly take over your dish. “The most important regional food—and my great weakness—is the date. Its value as a cultural player transcends its culinary worth.”—al-Hamad

For energy, pearl divers traditionally ate rice sweetened with dibs (date-syrup) to accompany the fish they caught on those endless, arduous sea voyages on the dhows. Dibs was used as an alternative to sugar. These days, Muhammar is still served as an accompaniment to fish dishes, but on festive occasions it may be served with a roast leg of lamb. This is seriously sweet rice, contrasting perfectly with fish, and just how the locals like it. Honey is a good substitute for the dibs.

Ingredients
Serves 4
Ingredients
Serves 4
Directions
Step 1:
Wash the rice and leave to soak for 30 minutes. Rinse until the water runs clear, then drain.
Step 2:
Soak the saffron strands in 3–4 tablespoons of warm water for 30 minutes.
Step 3:
In a large pot, combine the dibs with 3 ¹⁄³ cups boiling water, stirring continuously. Stir in the cinnamon stick and cardamom pods.
Step 4:
Add the rice and cook vigorously until the water has been absorbed. Pour the saffron and its soaking liquid together with the rosewater over the rice, then cover the pot with a sheet of foil, cover with the lid, and steam over low heat for at least 15 minutes, or until the rice is cooked.
Step 5:
Spoon out onto a large platter and top with lamb or fish. Directions
Step 1:
Soak the saffron in 4 tablespoons of warm water for 30 minutes. Rub the chicken pieces and potato with two teaspoons of curry powder and some salt. Wash the rice and leave to soak for 30 minutes. Rinse until the water runs clear, then drain.
Step 2:
Store in an airtight container in the refrigerator for up to 1 month.
Step 3:
Heat the oil in a large pan and deep-fry half the onion until soft. Drain on paper towels. In the same oil fry the cashews, then the raisins (be careful, they cook fast) until lightly golden, then transfer to paper towels. Increase the heat to medium and put in the chicken until the skin browns. Remove and place in a separate, deep pan. Partially fry the potatoes until lightly golden—this will take about 8 minutes—then place them on top of the chicken. Fry the remaining onion, garlic, ginger, and green chili for 2 minutes. Add the tomato, the remaining curry powder, and salt to taste. Cook until the tomatoes liquidize, then stir in the cilantro and yogurt and remove from the heat. Pour the sauce over the pieces of chicken and potato, cover and cook over low heat for about 45 minutes.
Step 4:
About 10 minutes before the chicken and potatoes are cooked, bring the same amount of water as rice to a boil. Add the spices and some salt. Cook the rice until soft and the water has been absorbed.
Step 5:
Sprinkle a layer of rice into another deep pan and top with the chicken, potatoes, and the sauce. Sprinkle over the fried raisins, cashews, and onion and top with the remaining rice. Pour the rosewater and saffron water over the rice.
Step 6:
Lay a sheet of foil over the Biryani, replace the lid and return to the heat. Cook over high heat for a minute until steam rises. Reduce the heat and steam for about 15 minutes.

Editor’s Note:
Serve with a side of yogurt and chopped cucumbers. Directions
Step 1:
Reheat the oven to 400°F. Mix the marinade ingredients together, coat the chicken with it and set aside.
Step 2:
Mix the stuffing ingredients together, but first, break the nuts up. Mohamed, the cook who showed me this recipe, packed the nuts into a small plastic bag and banged it a few times against the kitchen work surface, which nicely broke the nuts without having to use a knife.
Step 3:
Heat the oil in a large saucepan and cook the onion until soft and transparent. Add the nuts, tomato, barbecue sauce, and lemon juice, and stir. Cook for a few minutes, or until the tomatoes begin to liquidize. Remove from the heat and add the prunes and dates together with the cooked rice. Combine well, adding salt to taste. Firmly pack the stuffing into the chicken’s cavity and tie with a string.
Step 4:
Place the chicken in a roasting dish and cook for 30 minutes, then reduce the temperature to 350°F and cook for another 30 minutes. If the chicken skin starts to blacken, cover with a sheet of foil and return to the oven.

Editor’s Note:
The nuttiness and sweetness of this dish make brown rice the perfect accompaniment. My sister loves this dessert, and as a girl she forever pestered my aunt to make it for her. Milky desserts are very popular in the Middle East, and this one is a particular favorite—the rice thickens and gives it texture. There are many ways of making Muhalbiyat: with rice, with rice flour or with corn flour, the way it is made in Lebanon and Syria. Top with chopped pistachios to add some color and crunch.
Ingredients
Serves 6
Ingredients
Serves 6
Directions
Step 1:
Wash the rice and leave to soak for 30 minutes. Rinse until the water runs clear, then drain.
Step 2:
Put the rice and 1 cup cold water in a blender and process for about 3 minutes, or until the liquid becomes milky and the rice turns paste-like (this may take a few minutes depending on the variety of rice). You can also use a whisk.
Step 3:
Warm the milk in a casserole dish and then add the sugar. Stir with a wooden spoon over high heat until bubbles form at the side of the pan, then reduce the heat and simmer for about 1 minute. Add the blended rice and cook for about 20 minutes; keep stirring, and as the mixture thickens, you will feel resistance. Test the rice to see if it is cooked—it should be al dente.
Step 4:
Add another 1 cup boiling water, stir in the cardamom seeds and the rosewater, and simmer over the lowest heat for a few more minutes.
Step 5:
Remove from the heat and pour into bowls. Allow to cool before chilling in the refrigerator. “Cardamom and Lime: Recipes from the Arabian Gulf,”

by Sarah al-Hamad, is published by Interlink Books.

It’s Nearer Than You Think Unique, rich texture flavored with the exotic spice, it is strangely addicting. Cold and creamy, yet with a hint of warmth from the spice, this ice cream is a popular treat. Springing up on both coasts, our fave is from Carmela Ice Cream, available on Thursdays in downtown Los Angeles at the Farmers Market, City Hall, south lawn on 1st Street. Runner-up: Javan Restaurant in Bethesda, MD; (202) 449-2315.

Want to Make It? All You Need Is an Ice Cream Machine and These Ingredients:

Baltimore’s Wine Market features an exquisite three-cheese plate with quince paste and cardamom-spiced almonds; the casual restaurant reports it is inexplicably their most popular menu item.

The secret spice in the lamb burgers at Salt Lake City’s Acme Burger is a half teaspoon of black cardamom in each of his six-ounce patties. Says chef Adam Kreisel, “It’s earthy, toasty and a tiny bit peppery, and it sells splendidly.”

Lines form long on Sundays at San Diego’s Cardamom Cafe & Bakery, many to dig into the Bliss Cakes. Part pancake, part crepe, they are delectable and creamy with cardamom intermingled with honey and vanilla. Perfect for those mornings when you just have to try something new.
2977 Upas St., San Diego, CA 92104;
(619) 546-5609.

A throwback to the first Middle Eastern coffee blends (circa 1500), try the Coffee Cairo (1 lb. bag, $15) from Natasha’s cafe The coffee is spiced with cardamom and cloves and is just like you’ll find at the high end hotels across the Gulf. 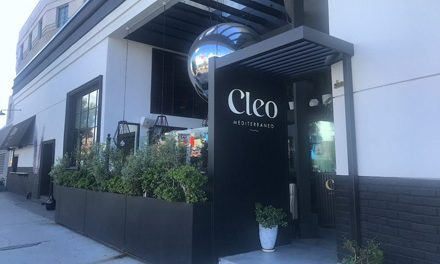 Spending Weekends with Cleo on Third 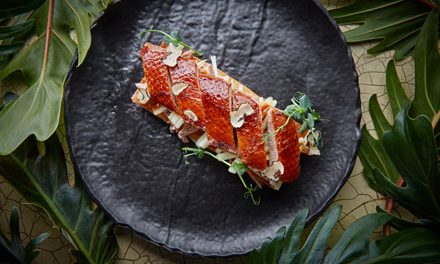 Seriously: The Best Places to Eat in Moscow Right Now 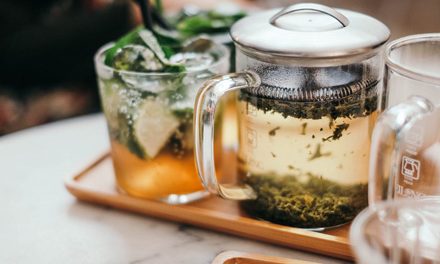 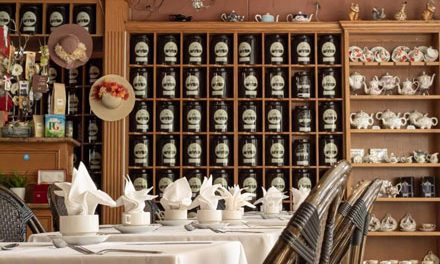