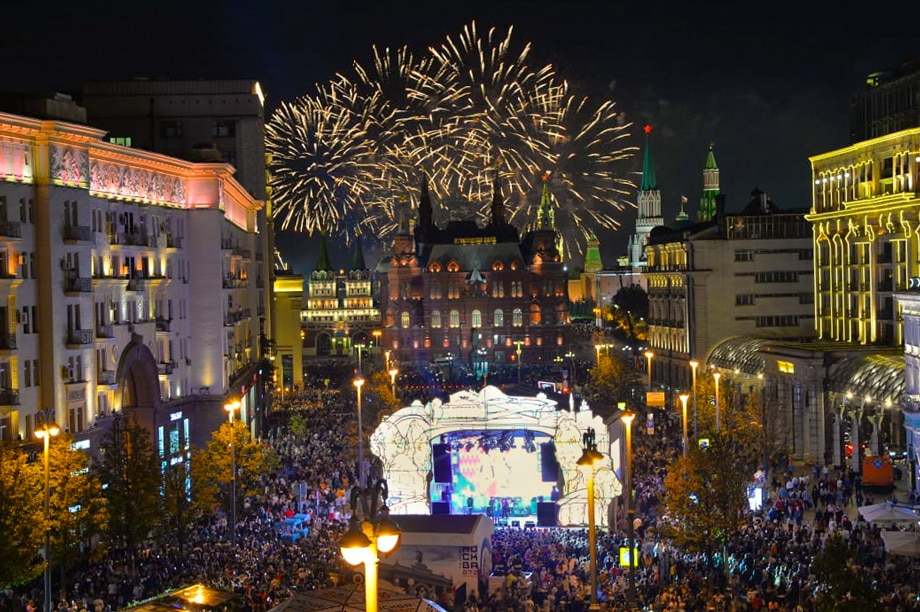 Just last December I visited Moscow, and oh my, I have never experienced such a fairy tale journey and the real Christmas Spirit as much as I did there. The art scene that highlights the richness of the country wrapped me in a big warm winter hug. Being the home of master composers as the likes of Tchaikovsky—who is widely considered the most popular Russian composer in history—made for an easy mental soundtrack during my visit. Sleeping Beauty and The Nutcracker Suite played in my mind with each new sight. It was a magical time, Christmas miracle if you will.

Without being cliché, my holiday was magical. I played with the snowflakes like a little kid who had never seen snow fall before…maybe because I had only fantasized about such a moment before. I danced and spun like a little princess that had found her freedom in the middle of Moscow’s City Center and just left her castle. The millions of decorative holiday lights and promenades of festivities keeps the city illuminated and allowed the little princess to let loose in the Moscow snow gardens. With this memory fresh, I was more than thrilled to return to the city to take part in Moscow’s 872nd birthday celebration. 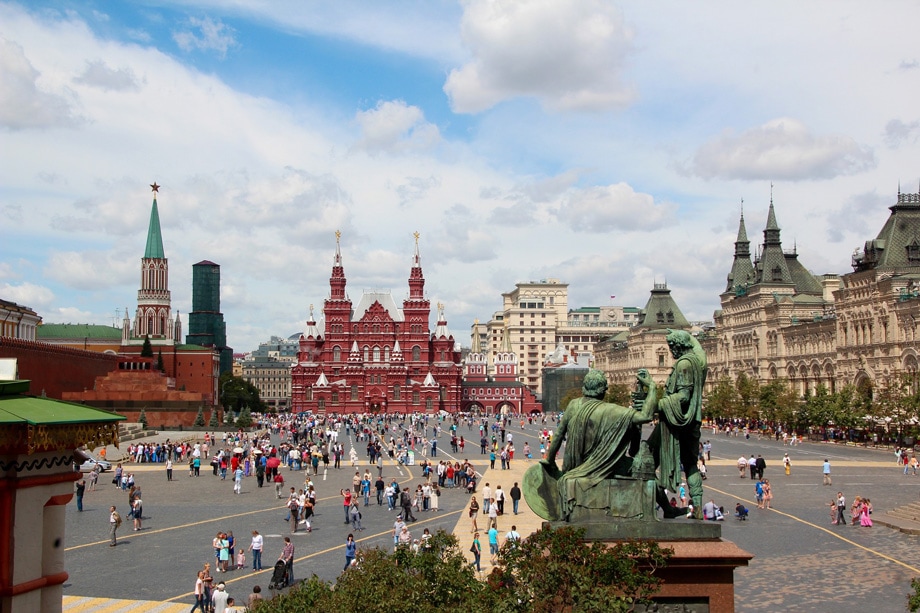 For Americans, traveling to Moscow may not be on their top priority list, but perhaps it should. Moscow is, in many ways, Europe’s best-kept secret. Over the past couple of years, Moscow has seen an immense number of changes. It’s astounding how the world has improved in the last 30 years, along with the perceptions we had about this part of the world. The falling of the wall was rather emblematic in many ways, but for me, it was that the ability to communicate with this part of the world suddenly changed and it’s become better and better ever since. In turn, there has been a serious effort, particularly over the last decade to make Moscow more tourist-friendly and the overall experience has become a very positive. And it shows. 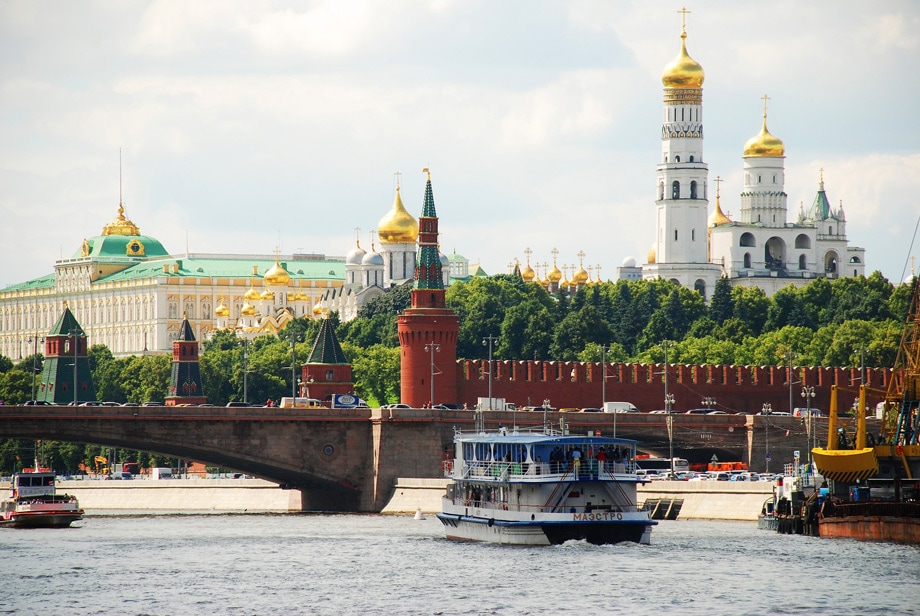 The view of the Kremlin from the Moscow River

Current mayor Sergey Sobyanin has led the transformation and when you arrive, you see one of the most beautiful and clean cities in the world. There’s so much to offer if you want to explore and if you’re a travel enthusiast like me the positives of imperialism and the past monarchy indulges the essence of the human spirit. Almost like reaching to the soul of what real pleasure and artistry is all about. I grew up listening to Tchaikovsky and walking the main street at Tverskaya changes your mood instantly, especially with the Bolshoi Ballet as the backdrop as you head to Red Square and the Kremlin. 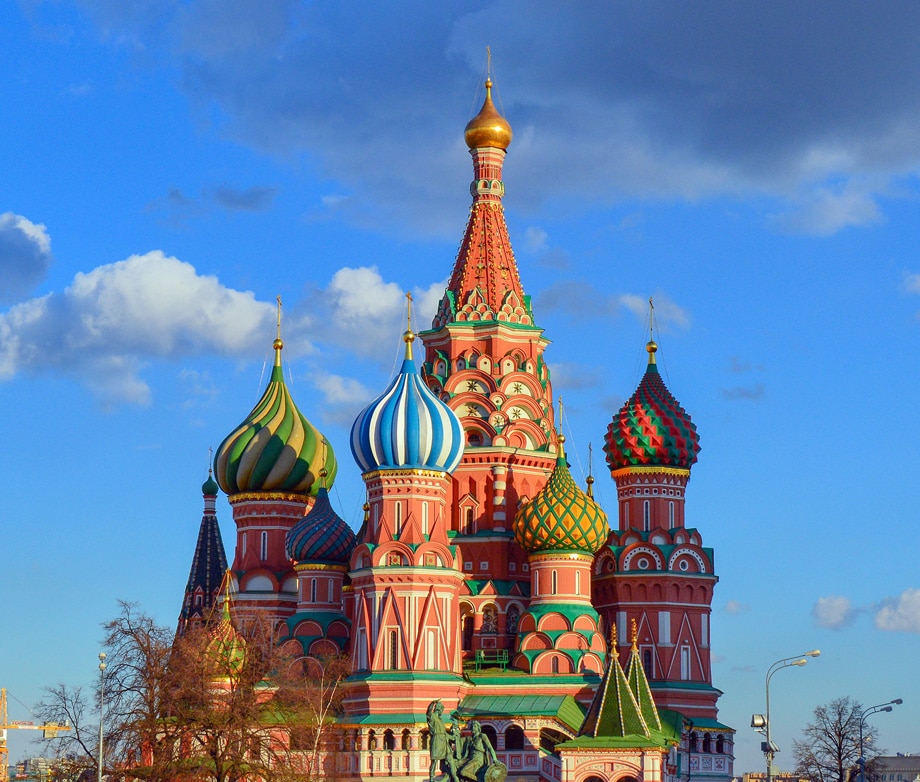 Taking a walk is not your typical stroll, but rather a six to ten mile voyage. Everything about the city invites grandeur. During your walk, you must shatter all your ideas of Moscow’s USSR’s past and be ready for a journey that reflects modern art blended with a historical consciousness that creates this masterpiece of a city.

The festival scene has united the Moscovite communities and increased tourism. Arriving early for the 872nd, I kept wondering what would be the face of the city during festivities. Things like dancing under the summer sun and creating adventurous environments that challenge your senses. The way the city transforms for their City Days is a master lesson in beautification by Moscow Seasons, the preeminent festival producer in the city. The change in the face of the city very much parallels the way a woman would dress up for a fancy night out or how a great painter gives life to a canvas with each brush stroke.

Taking in the City, Festival-Style 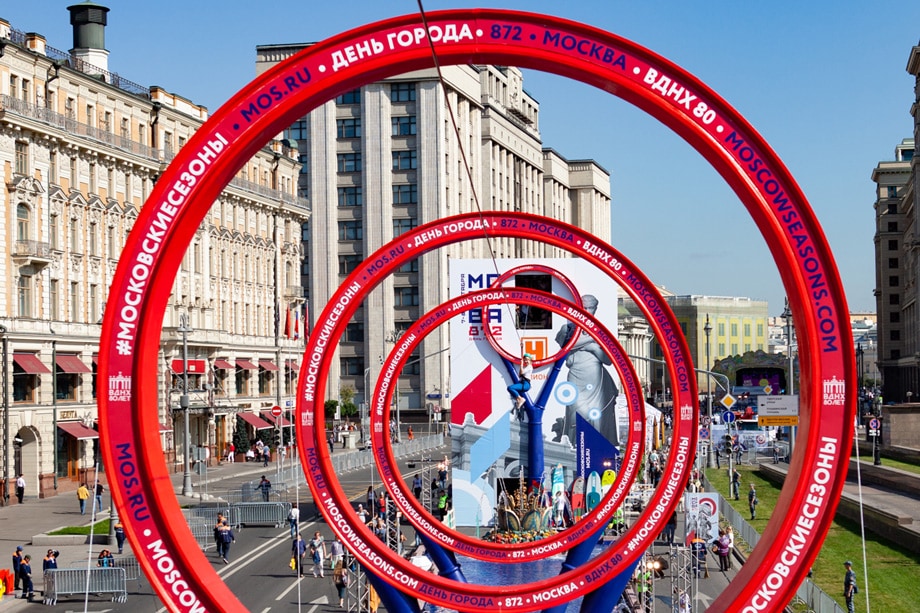 The two-day festival seems to span entirely of Moscow with performances originating from the main Tverskaya thoroughfare. The entertainment and activities are a virtual sensory overload. Shark-suited dancers at the Bolshoi theatre square, ziplining in front of the Russian State Duma Building, high-wire walking, classical and chorus performances, street parades and staged theater routines. That’s not to mention the Flower Jam Festival that was folded into the City Days, replete with 1,500 plus beautiful gardens spread over every district of Moscow. My favorite being the magenta mum garden manicured to the left of the sprawling State Historical Museum. 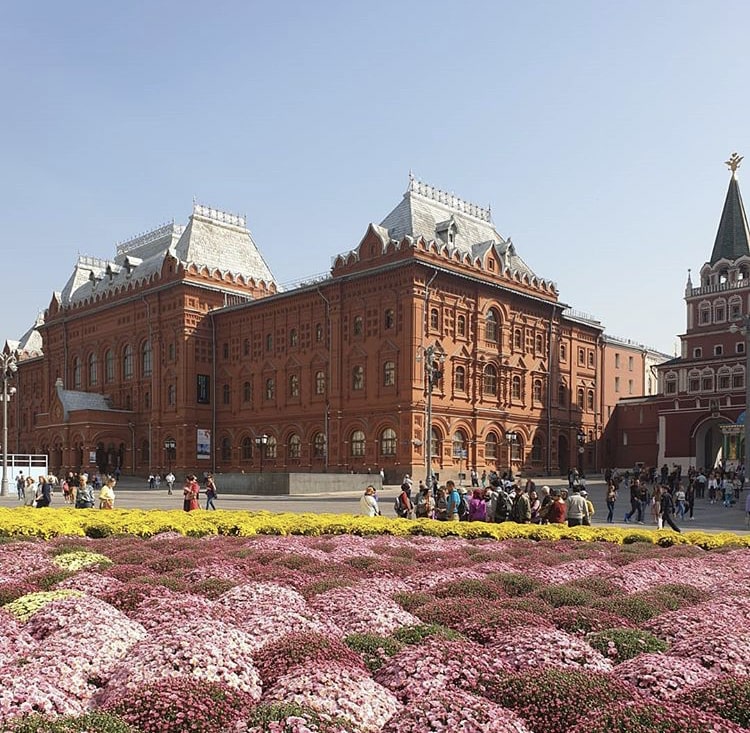 As I explored the festival, it dawned on me that my perception of Moscow continued to be completely off the mark. I never realized the level of sophistication and intellectual interpretation of history and culture that wraps the city’s fortresses as a symbol of power and resolve. From that reality, I saw the transformation to one of the finest open-air museums anywhere in the world. I struggled with this fact because of the USSR ideology of the past. Stunning evolution does not occur over night, yet it seems to be happening before my very eyes. 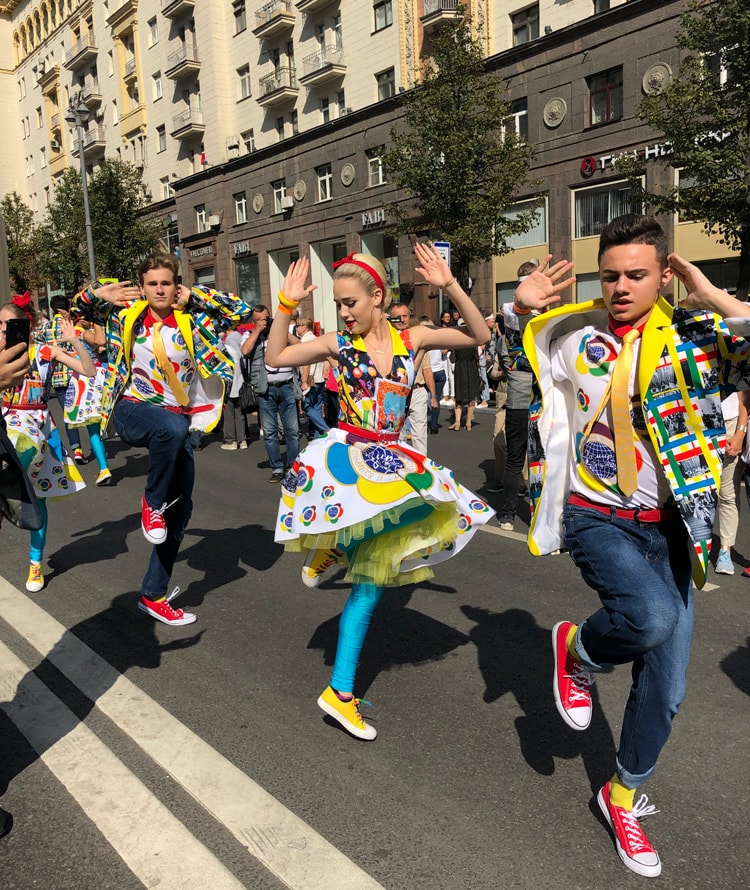 The festival tour ranged from primeval shrines to Mongol explorers through the opulent parades of the Tsarist years and into the mighty Red Square for the multi-colored St. Basil’s Cathedral and relics of the communist era, including Lenin’s Mausoleum. There are contemporary attractions too, most notably Zaryadye Park, designed by New York’s High Line architects. Venturing into the forbidden Kremlin compound is as simple as paying the 1000 rubles (around $16 USD) admission. There you can take in the picturesque frescoes of the Russian-Orthodox cathedrals, the Ivan Great Bell Tower, and Peter the Great’s Arsenal.

X-Sports are big in the States, but here at the festival they actually teach you how to navigate the special pump tracks set up. If it had wheels, you can experience the thrill of winged speed. Bicycles, scooters and roller skates were all available. If you wanted to soar 30 feet over Moscow via a 250-foot steel zipline suspended between two towers, then why not? Even with three million people attending the festival, the lines were short. There was a seven-member daredevil team from all over the world (Russia, France, Canada, Germany) attempting to set a high-wire world record by walking across an 800-foot cable suspended between the Neva Tower and Southern OKO Tower in the Moscow City business district. Even if they didn’t break the record (they did!), it was a breathtaking sight to behold. 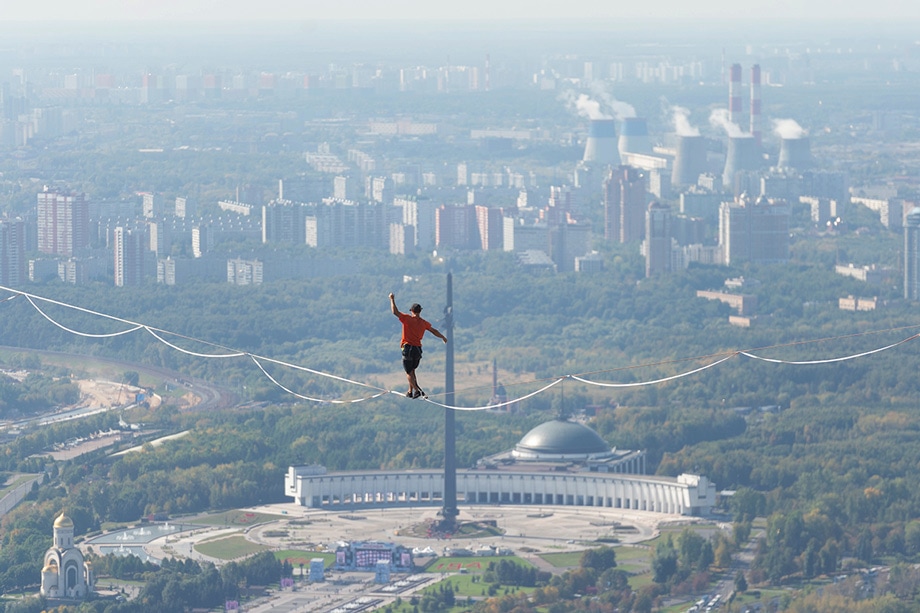 Day one was a penetrating day of history blended with the sounds and cultures of the region. No longer did I have to rely on my internal jukebox. Tchaikovsky was performed on one of the stages and wafted over to my ears blocks away. Young and old, American and Russian, we all shared the day. It was great fun. One could never imagine this happening in the 1980s, yet here I am, and everything is free to the public. 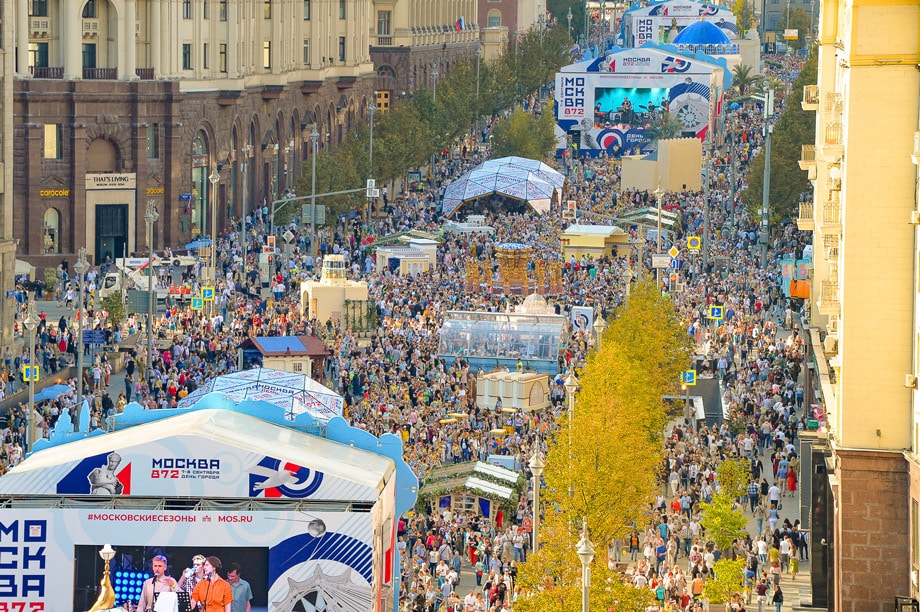 The next day I moved to Russia’s main exhibition complex, the VDNH, aka the Exhibition of Achievements of National Economy just north of the City Center. The complex turned 80 this year and is something not to be missed, City Days or not. The VDNK park is surrounded by 75 spectacular pavilions commissioned by Stalin in 1939, each marking one of the Soviet Union member states or some sort of national achievement. 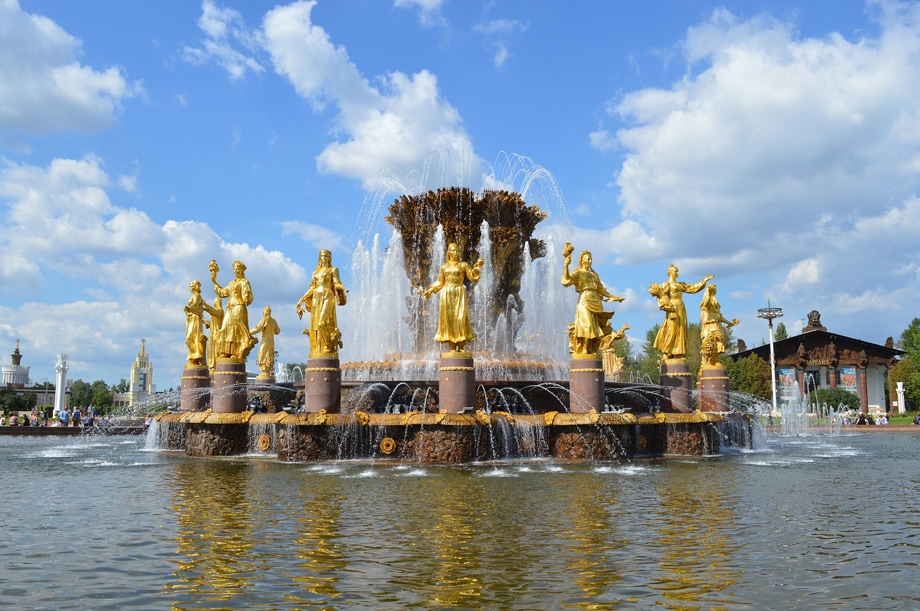 At VDNH’s north entrance arch, you discover large models of the Worker and Kolkhoz Woman Monument and the Friendship of Nations Fountain, which was readying for a private concert. In my rush to get to the Cosmos Pavilion, I missed the 1940s motorcycles exhibition where there were mechanics master classes. I could have learned to assemble and tune these antique motorbikes. Oh well, maybe next year, I can evoke my inner grease monkey and learn. 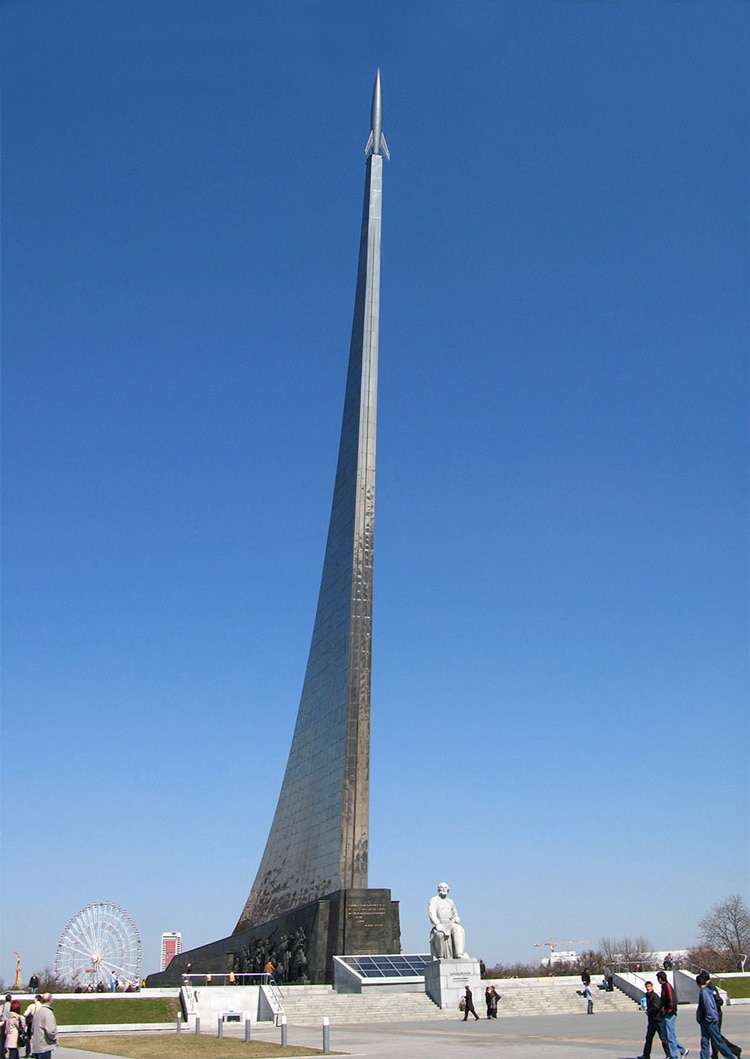 The Museum of Cosmonautics

The arrival to Russia’s largest space museum, the superlative Cosmos Pavilion turned out to be a special experience. I was up close and personal with the final frontier seeing the Vostok rocket that first sent Yuri Gagarin into outer space and walking through an actual module of the Mir Space Station module that united the USA and Russia in space travel. If you walk farther north you will reach more space in the form of the Museum of Cosmonautics, which has one of the most astonishing monuments conceivable: a steel rocket shooting into the sky, with a three hundred foot long steel exhaust trail running back to Earth. 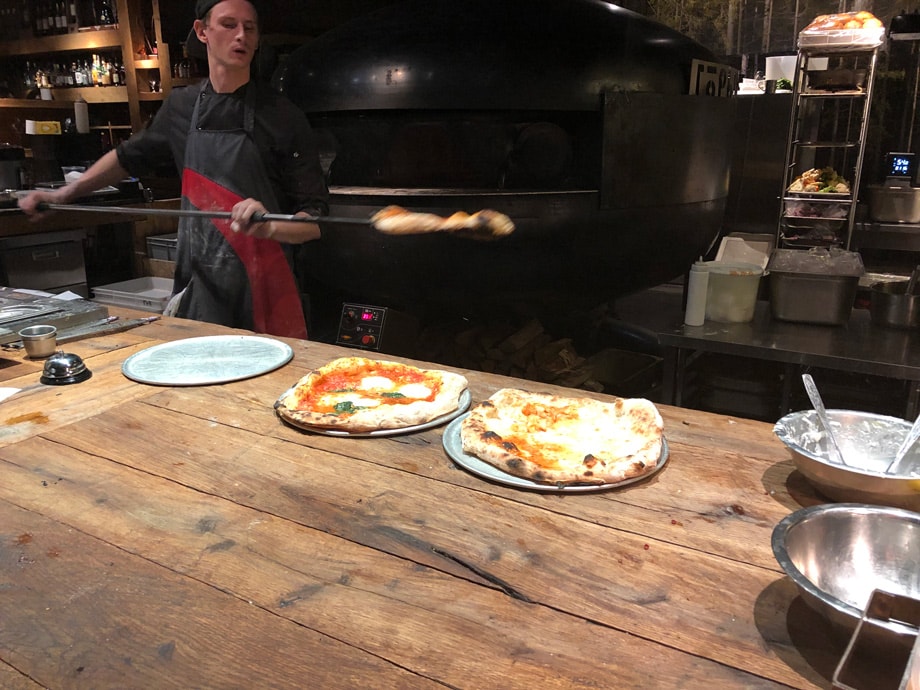 One stop to Moscow’s hot-ticket restaurant, Gorynych and you’ll be hooked. It is a special experience to say the least. Gorynych is in the loft at the Central Market, an industrial building that houses artisan food markets. It’s a grill, bakery and bar all in one. The restaurant’s balcony offers lavish views of the Tsvetnoy Bulvar area while the vast terrace sits contentedly in the middle of Rozhdestvensky Bulvar. The food is prepared Haute Cuisine-style in full, open view kitchens using ovens, jospers and smokers to prepare meals in ways you probably thought not possible. The avocado grill with chimichurri sauce or the cauliflower with light cheese sauce with a side of Lebanese hummus are great options. They have an amazing bakery with freshly baked gluten free bread as a takeaway too. 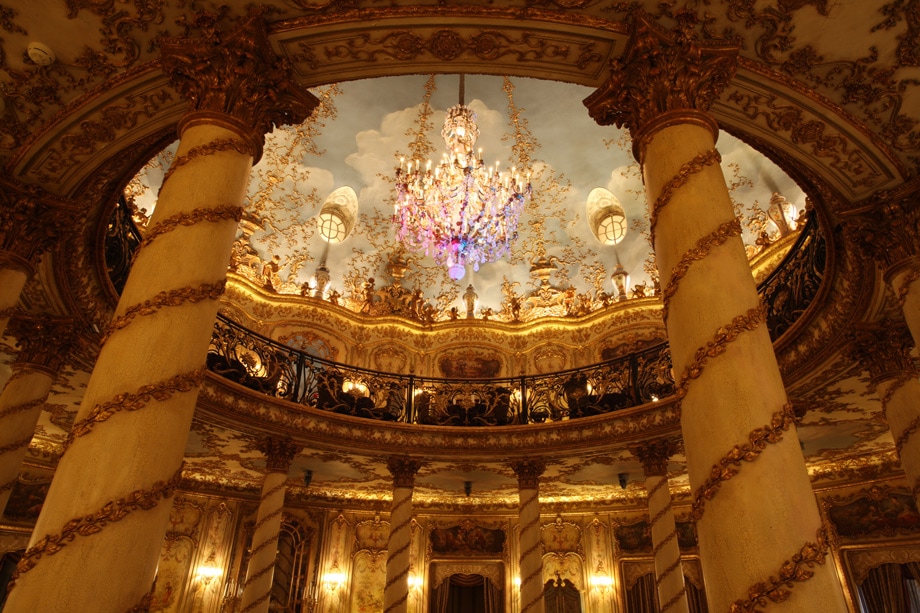 If you want a special evening dining experience, the Turandot is one of the finest restaurants in the world. The rich décor was built from scratch by Russian entrepreneur and restaurateur Andrey K. Dellos leaves you feeling like you are in a museum or opera house or even one of Catherine the Great’s palaces. Turandot’s chef, Dmitry Eremeev, believes in the “no limit” principal of cuisine crafting and he doesn’t disappoint. Favorites include the lavish wasabi shrimp and the sushi rolls with black caviar, but the chicken with its perfect skin and pristine white meat are the best this Earth has to offer. Don’t leave Moscow without getting your royal on! 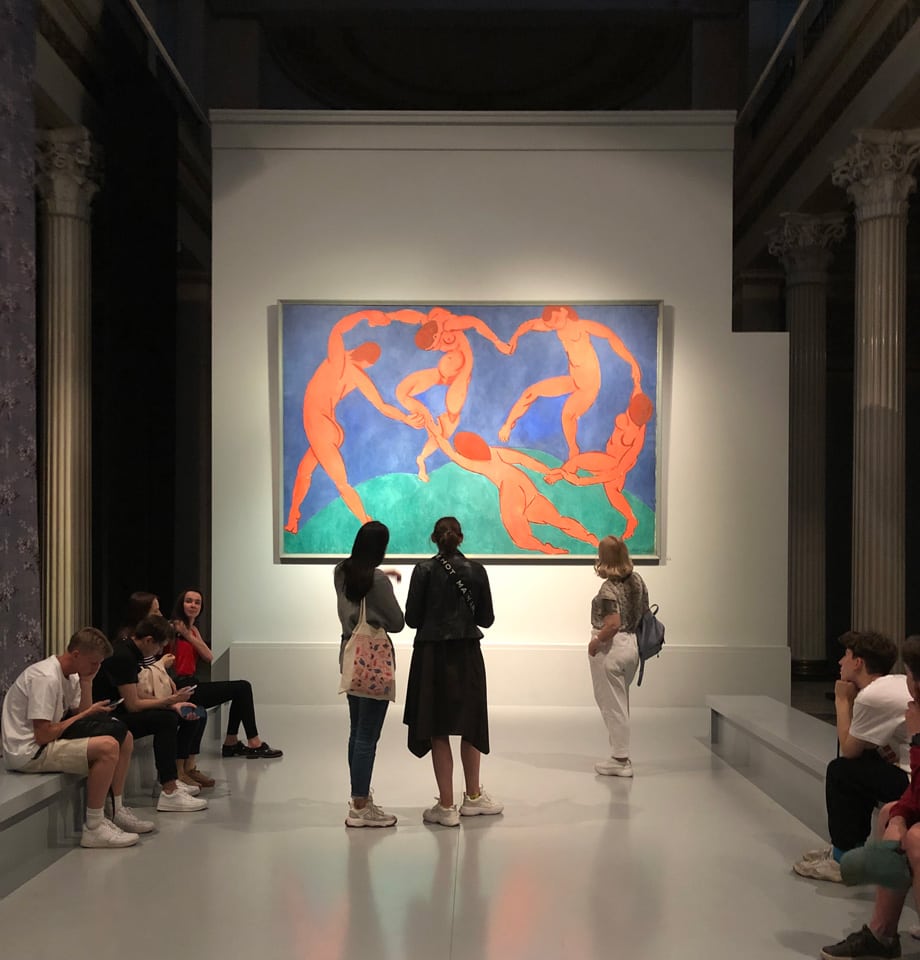 All of my life I have been fascinated by the great French impressionists and a special docent tour put me front and center to many of the great works courtesy of the pioneering collections of Sergei Shchukin and the brothers Ivan and Mikhail Morozov. The galleries were confiscated after the Bolshevik Revolution, and eventually divided between the Pushkin State Museum of Fine Arts in Moscow and the State Hermitage Museum in St Petersburg.

André-Marc Delocque-Fourcaud, Shchukin’s French grandson is the guest curator of The Shchukin Saga at the Pushkin, which ironically enough is just footsteps from the Trubetskoy Palace where Shchukin originally displayed his collection. The exhibition tells “the life story of this big family, their rise and fall” through eleven halls of Impressionist, Old Master and Modern paintings, 18th-century French furniture, “Oriental rarities” and archival documents. In addition to the over 100 paintings held by the Pushkin, the Hermitage in St. Petersburg lent 60 works by Monet, Cézanne, Picasso and Matisse. Matisse’s 1909 masterpiece The Dance is on display and seeing it in Moscow is soon to be a rarity as the Hermitage curators “consider that this Mona Lisa of the 20th century is too precious to travel any more.” 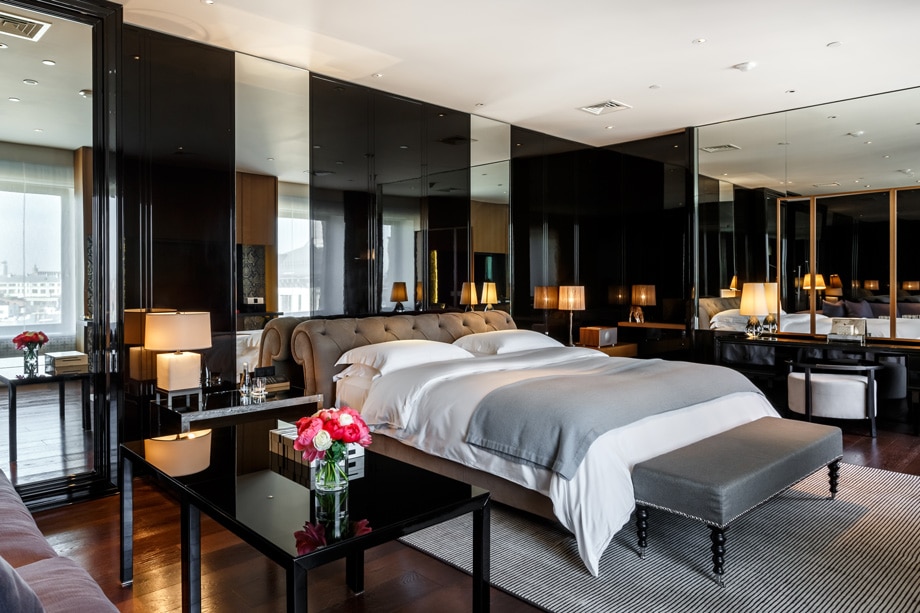 Hands down the one place to stay is the Ararat Park Hyatt Moscow. The rooms are special and you feel something regal as you enter the hotel. It is centrally located in the City Center and only steps to everything you’ll want to see: The Bolshoi, Red Square, The Kremlin, the iconic shopping at GUM and TSUM department stores, along with some of Moscow’s best restaurants. The hotel features the Conservatory Restaurant on the 10th floor. When I was there it was my go-to place to catch-up with colleagues and laugh with special drink and caviar while taking in the Kremlin. 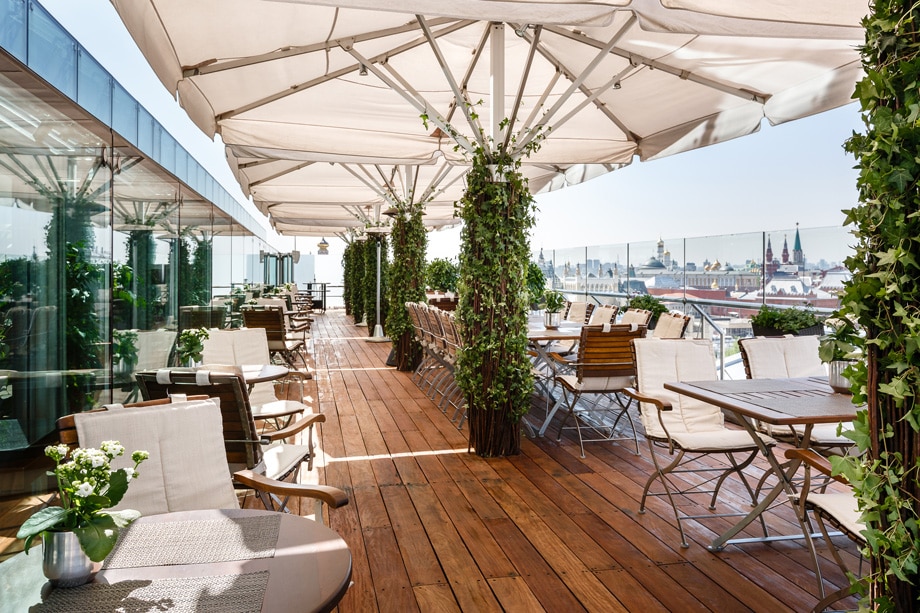 From my panoramic view of this mesmerizing city from the Ararat Park Hyatt, I can feel the sound of music and understand the reasoning why I am so drawn here. Breathing the artistic vision of Russian composers is engraved in my heart and the heart of the country. So for now, Moscow I bid you “Do svidaniya!” (duh svee-dah-nee-ye), which literally means “Till the next do we meet.” I didn’t know I would love you so much. 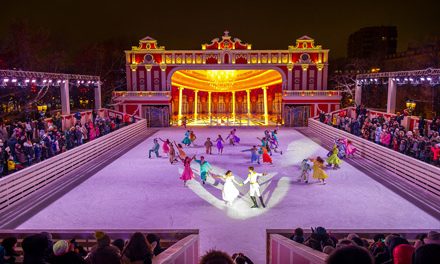 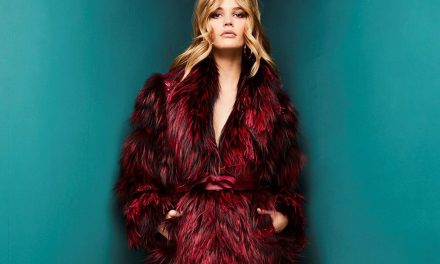 Ready to Wear for Spring/Summer 2019